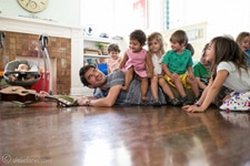 Robert Tom Kalinowski studies Learning, Teaching, Cognition, and Development (LTCD) as a doctoral student at the University of California, Irvine.

Robert’s primary interest is in discovering the impacts of important cognitive skills in early childhood on one another and on later academic and life achievement. In particular, he experimentally investigates the connections between executive functions, spatial skills, and math skills throughout early childhood.  Which skills matter the most for future success? Which of these is malleable in a practical way within the context of preschool or at-home learning?  In designing ways to address these questions, Robert writes and performs songs with movement for preschool aged children, targeted at developing specific skills.

Robert also conducts research through a National Science Foundation funded project with the mission of integrating music and dance approaches to improve science learning for 3rd, 4th, and 5th grade public school students. The project is active in hundreds of classrooms in the Southern California area.  For more info: escape.uci.edu

Robert comes from a performing arts background and is never far from his trusty giant ukulele. He is a former Nickelodeon host and former lead singer of the retro big band, The Glenn Miller Orchestra. He currently tests out his new songs for kids at his “Mister Robert Show” YouTube channel, and continues to sing for groups of screaming preschoolers from time to time. His career goals include researching and developing innovative approaches to creating quality educational TV shows for children.

Robert is a National Science Foundation Graduate Research Fellowship Program Honorable Mention for 2016, for his research proposal, “Singing for Spatial Skills: Improving Spatial Cognition in Early Childhood.”
Robert presented “The Spatial Song” experimental design at the Society for Research on Child Development special meeting on Technology and Media in 2016.