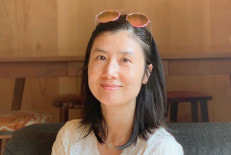 Xiao Lin is a Ph.D. in Education student specializing in Language, Literacy, and Technology (LLT) at the University of California, Irvine. She had two master degrees, one in Public Administration (MPA) from Columbia University in the City of New York in 2019, and one in Applied Linguistics from Beijing Foreign Studies University in 2006.

Xiao used to work as a Chinese governmental official in State Administration of Grain and composed over 50 consultant reports on regional and international grain market and latest technologies, which were used as the internal reference for grain policy making and adjustment. From 2012 to 2016, Xiao taught reading, translation, and interpretation to undergraduates in a Chinese college and was involved in several research projects on phonetic acquisition sponsored by Chinese Ministry of Education Humanities and Social Sciences.

Xiao is an independent mother with two wonderful boys. While earning her second master’s degree in New York, Xiao was inspired by her school-aged boy and created “Reading Candy”, a parent-kid reading club, which was launched on China’s largest social media outlet. The program aims at promoting leveled reading books from the U.S. for parents and children in China and has attracted over 10,000 followers in one year.  Xiao was also the manager of research team on her capstone project, “Development of a Student Literacy Assessment Tool for 5th Grade Students in Laos”, based on Pratham/India’s Annual Status of Education Report (ASER) Tools. The final tools will be applied in Laos from September, 2019, by Pencils of Promise (POP), a US-based educational NGO.