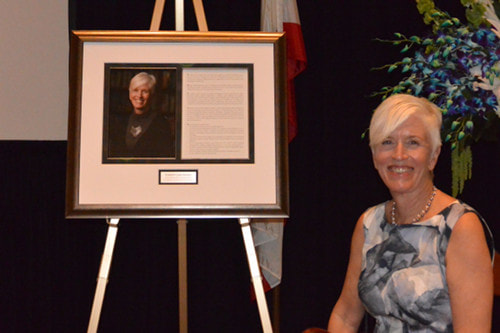 UC Irvine administrators, faculty, staff, and community members honored Dean Deborah Lowe Vandell at her "Stepping Down" event on June 16 at the Beckman Center. Dean Vandell is completing 10 years of service, first as Chair of the Department of Education and subsequently, from 2012 to the present, as Dean of the School of Education.

​Dean Vandell closed the formal portion of the program by thanking colleagues, friends, and family members for their encouragement and support during the past 10 years and highlighting the impact their contributions have had toward the School's emergence as a national leader in the field of education.
Professor Mark Warschauer Named Interim Dean of School of Education
June 17, 2015
For Immediate Release

Professor Mark Warschauer has been named Interim Dean of the School of Education, effective July 1, 2015.

Professor Warschauer joined UC Irvine in 2001 as an assistant professor, and is currently serving as an associate dean in the School of Education and director of the Digital Learning Lab. He received his Ph.D. in Second Language Acquisition from the University of Hawaii at Manoa.

Professor Warschauer’s research focuses on application of digital information and communications technologies to higher-level literacies and to second language acquisition by children and adults, both in the U.S. and internationally. He has directed the educational technology program of a large U.S.-funded development project in Egypt; worked as a Fulbright scholar to help reform teacher education in the Czech Republic; served as a curriculum specialist at Moscow State Linguistic University; spent a year as a visiting scholar at Waseda University in Tokyo; and conducted field research in China, Singapore, Brazil, Mexico, and India.

A successful teacher in the classroom, Professor Warschauer was instrumental in the establishment of a research doctorate program in the School and served as its first director. He was named a 2014 fellow by the American Educational Research Association in recognition of his notable and sustained research achievements. He was also recently named Inaugural Editor-in-Chief of AERA Open, the newest research journal of the AERA.

​Abstract
The primary aim of this project is to understand the mechanisms underlying any observed improvements in academic and behavioral outcomes for children with Attention Deficit-Hyperactivity Disorder (ADHD) resulting from participation in a working memory and motivational intervention. ADHD affects up to 10% of children in the US and is associated with poor academic achievement. Although we have shown the promise of a cognitive intervention that focused on working memory skills in a prior IES-funded project, motivation training was not included, and more exploratory work must be done to understand the mechanisms that underlie any observed gains, as well as the mediators and moderators of any observed gains.
​UCI Graduates Inaugural Class of 123 BA in Education Sciences Majors

UCI has graduated 123 B.A. in Education Sciences majors at the end of the first year of offering this new undergraduate degree that promotes the study of education as an academic discipline.

On June 13, the School of Education hosted a commencement-day breakfast to honor the program’s 15 inaugural honors graduates.​
UCI’s BA in Education Sciences is one of the university’s most diverse programs. Among the students declaring an Education Sciences majors, 48% are from minority groups typically not represented in higher education, and 70% are first-generation college students.
Ph.D. Students Hooded at 2015 UC Irvine Commencement
June 13, 2015
Bren Events Center

Kreshnik Begolli, hooded by Susanne Jaeggi
Dissertation: The Role of Executive Functions and Visual Supports for Structure-Mapping in Mathematics

Jennifer Long, hooded by Rossella Santagata
Dissertation: Developing an Understanding of Systems in the Context of Ecohydrological Citizen Science Research

Ilona Missakian, hooded by Carol B. Olson
Dissertation: Perceptions of Writing Centers in the Community College; Ways that Students, Tutors, and Instructors Concur and Diverge

In June she will travel to China to begin her study how one’s appraisal of feedback influences performance—e.g., if negative feedback prompts the subject to perceive the working memory (WM) task as a challenge or a threat.

As part of her cross-culture comparison with counterparts in the U.S., Ms. Tsai will assign subjects to one of two conditions where they will be given positive or negative fictitious feedback on the WM task irrespective of their actual performance. Ms. Tsai will examine the influences of this feedback on WM performance by assessing individual variables that drive any differences. 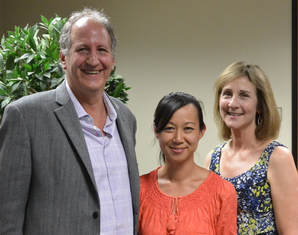 In 2013, the School established the Michael E. Martinez Prize for Outstanding Research and Service. This annual award commemorates the scholarly and professional achievements of the late Michael E. Martinez, Professor of Education at the University of California, Irvine, from 1992 through 2012 - "Michael E. Martinez - A Lifetime of Service". As a scholar, Professor Martinez is remembered for his significant contributions to our understandings of cognitive processes and the malleability of intelligence, and how these understandings could be applied to student learning. He is also remembered for the kindness and collegiality that he embodied. In his honor, this award is given to a doctoral student who demonstrates superior scholarship, intellectual curiosity, and high levels of professionalism and collaboration with fellow students and/or faculty. I’d like to invite Mrs. Stephanie Martinez to come forward to present the award to this year’s honoree.

This year’s nominee has a very special place in my heart. She is a National Merit Scholar who graduated Magma Cum Laude from UCLA in Psychology. Before entering UCI, she was one of the most outstanding mathematics teachers in the country, and, in fact, won Teacher of the Year award in Cypress School District. She has published dozens—yes I said dozens—of research or practitioner articles on teaching mathematics, and has won countless local and national awards, including the Susan Gay Award for exemplary doctoral work in mathematics education and the Patricia Scott Future Leaders Award for exemplary promise as a future leader of higher education. She has served as a pedagogical fellow, training and supervising other doctoral students in instructional approaches, serves on the DECADE Graduate student council to promote equity and diversity in graduate education, and coordinated an interdepartmental project to design a series of TA instructional-development workshops on equity, diversity, and inclusion. Oh, and by the way, did I mention that she speaks both Chinese and Spanish fluently? 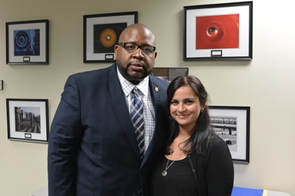 The Keith Curry Scholarship was established by Dr. Curry, School of Education alumnus, to honor a Ph.D. student who has demonstrated significant growth in academic achievement and unusual perseverance – qualities that Dr. Curry believes characterized his journey toward his doctorate.

​This year’s honoree, Janet Garcia Mercado, is the first in her family to graduate from college. She worked 30-40 hours per week, often during night shifts, to put herself through Cal State Los Angeles. She sought out and received research fellowships as a Cal State student and took full advantage of them. At UCI she is pursuing research on equitable teaching practices for helping diverse students succeed in mathematics, and has presented her work on this topic at the American Educational Research Association, National Council of Mathematics Teachers, and many other venues. In addition to her own academic success as a doctoral student, she has dedicated herself to recruiting diverse students, both through her participation in the CSU Diversity Forum and through her work with the PhD Admissions Committee. 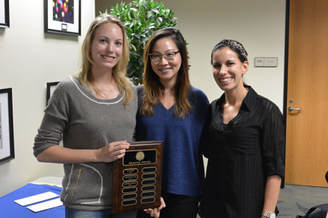 The Associated Doctoral Students in Education have selected Ph.D. student Katerina Schenke for the 2015 Outstanding Service award. Ms. Schenke is a fifth year doctoral student specializing in Learning, Cognition, and Development (LCD). She is advised by Distinguished Professor Jacquelynne Eccles.
In presenting the award, ADSE presidents Joyce Lin (2014-2015) and Rachel Stumpf (2015-2016) praised Ms. Schenke for her service to the program and to her fellow students.

The service award is designed to honor a student whose work often goes unnoticed. As we know, a lot happens within these walls everyday, and much of this work takes place behind the scenes. This award goes to someone who has selflessly given to the School, and we would like to acknowledge her time and energy by presenting her with the ADSE service award for 2015. Katerina is receiving this award because of her Involvement in getting the Stats 'n' Snacks organized, contributing to multiple Professional Development workshops, facilitating graduate student access to various statistical programs in the graduate workroom computers, and giving advice to and mentoring graduate students. 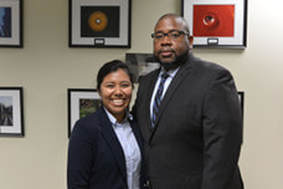 Dr. Keith Curry, CEO of Compton Community College District (CCCD) and alumnus of the UCI School of Education, established the undergraduate scholarship to support students who have demonstrated a high level of academic achievement and "grit" in pursuing their bachelor's degree.

In consultation with Dr. Curry, Director of Student Affairs Kevin Reimerimplemented a three-step selection process to identify the student who most embodied the qualities valued by Dr. Curry. First, Angela Duckworth's 12-item GRIT Scale was distributed to the ~550 students with a declared Education Sciences major as of Spring 2015. Next, students with the three highest GRIT scores matching with academic excellence were invited to submit essays discussing their educational journey. Then, the scholarship committee reviewed the submissions and selected the recipient.

​Ms. Berenize is a Santa Ana native who has been working in district schools with the eventual goal of becoming a teacher in her neighborhood of origin. She is enriching her study of education as an academic discipline with coursework in social policy and political service.
​SoE Alumni Executive Council Holds First Meeting

To open the meeting, Dean Deborah Vandell summarized the history of the School of Education and presented an overview of the various existing programs. She also explained the direction for fundraising for the SoE and shared the need to specifically support more student scholarships and the Dean’s Excellence Fund. (The Dean’s Excellence Fund is a flexible source of support for the School. This fund provides crucial resources for the students, faculty, and programs that need it most, allowing the Dean to act quickly on new opportunities or urgent matters. The Dean’s Excellence Fund has been used to support faculty research in early childhood development, afterschool programs, mathematics and science, literacy, technology and education.)

Following discussion, members agreed on five foci that will guide Council activities:
Members plan to meet again in August prior to the start of the academic year. 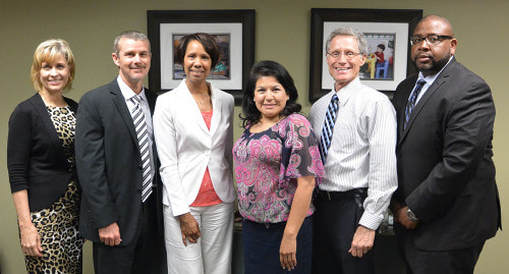