Established in 1978, the UCI Writing Project will celebrate its 33rd anniversary this summer.  Directed by Dr. Carol Booth Olson in the Department of Education, the Writing Project offers summer programs for students from grades K to 12, professional development for more than 3,000 teachers each year, and an invitational institute for a select group of 25 teachers who attend intensive training each summer.

With the help of a $3 million grant from the U.S. Department of Education, the results of their unique training program is being tested in more than 15 schools in Orange County.

Thirteen faculty members, two department lecturers, a staff member, and fifteen doctoral students contributed to the success of the recent annual meeting of the American Educational Research Association (AERA), held April 8 through April 12 in New Orleans. In addition to presenting research papers and posters, department members and students served as chairs and discussants and participated in administrative meetings and graduate student seminars.

​The conference theme for 2011 was "Inciting the Social Imagination: Education Research for the Public Good." The theme for the next AERA Annual Meeting, to be held in Vancouver April 13 through April 17, 2012, will be "Non Satis Scire: To Know is Not Enough." Submissions open June 1, 2011 and close July 22, 2011.


The UC Irvine Cal Teach Science and Math Program was launched in 2006 in response to the critical shortage of qualified middle school and high school math and science teachers throughout the state. The program, a collaborative initiative sponsored by the School of Biological Sciences, School of Physical Sciences, and Department of Education, is designed to offer undergraduates opportunities to explore math and science teaching as a career option.

On May 18th, UC Irvine Cal Teach celebrated completion of its fourth year during the Annual End-of Year Celebration. Gathering at the University Club, administrators and faculty members reviewed the year's accomplishments and honored participating students and partnership schools and mentor teachers.

In 2012 the UC Irvine Cal Teach program will graduate its first group of students who have earned both a bachelor's degree in math or science and a California teaching credential all in four years.

With twenty-seven years of service in education, three-time UC Irvine Alumna Judi Conroy was a natural choice to be nominated by the Department of Education to receive the University of California, Irvine, Lauds and Laurels Distinguished Alumna award. 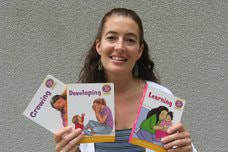 With a research emphasis in Early Childhood Education, a minor in Educational Studies, and a focus on service to surrounding communities, faculty members in the Department of Education are committed to engaging local organizations, health care providers, professors, graduate student researchers, and undergraduates in efforts to promote positive youth development. Featured in this newsletter are two of these efforts - the Baby Books Project and the Early Literacy Program: Reach Out and Read.

Baby Books Project
The Baby Books Project encourages safety practices and health habits among new parents by providing a series of educational baby books to new mothers. Working with colleagues, Lead Researcher Dr. Stephanie Reich developed five books to boost health habits and safety practices of new mothers. Entitled Bonding, Discovering, Growing, Developing, and Learning, the books were given to new mothers when their babies were 2, 4, 6, 9, and 12 months old with data collected with these families from the 3rd trimester of pregnancy until babies were 18 months of age. Research findings so far have shown that new mothers learned the educational information in the books and their new knowledge was associated with changes in their attitudes, beliefs, and parenting practices. There were fewer injuries, less maternal stress, fewer depressive symptoms, less support of using corporal punishment, and  increased beliefs in the importance of parenting. 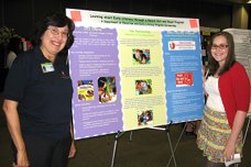 July 1, 2010 through April 30, 2011 National Program Data:
Reading specialist Dr. Linda Clinard has been an author, K-20 educator, and Distinguished Lecturer who has collaborated with UCI Department of Education faculty to pursue community-connected early literacy efforts that engage children and families.

The Orange County ELP program is a unique model of the nationally-respected Reach Out and Read (ROR) program that was started in Boston by pediatrician Dr. Barry Zuckerman. ROR focuses nationally on having pediatricians give families children’s books and informational handouts and guidelines for reading with infants and young children during well-child development screening visits.

The Orange County ELP program follows the national model. It is unique because it places Mentor Readers, volunteers, and UCI Student Readers in pediatric waiting rooms where they model for parents reading with young children, and they give out gently-used books for families to take home to add to their home libraries as they put into practice early literacy strategies they have seen modeled in the waiting room.

In support of this collaborative effort to encourage parents to read to their children and engage children in other literacy activities, UC Irvine offers an undergraduate course, Education 193B: Directed Studies in Early Literacy. Undergraduates who enroll in Education 193B are trained during bi-weekly class meetings and are mentored in pediatrics clinics where they devote a minimum of eight hours per week modeling interactive early literacy strategies as Student Readers in Orange County pediatric clinics. UCI Student Readers read to children as a way of demonstrating effective early literacy strategies for parents that engage children in listening, speaking, thinking, reading, and writing. 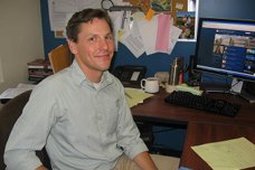 ​Assistant Professor Thad Domina was recognized for "Excellence in Undergraduate Teaching" during the 18th Annual Celebration of Teaching, held at the UC Irvine Student Center Doheney Beach Room on May 26.

Sponsored by the UCI Division of Undergraduate Education in conjunction with the Council on Student Experience; Graduate Division, Web Technologies; and the Teaching, Learning, and Technology Center (TLTC), the event honored outstanding faculty, lecturer, and pedagogical fellows.

In presenting Dr. Domina with his award, Department Chair Deborah Lowe Vandell confirmed: "It is for his successes in teaching, mentoring, and programming that Thad Domina is deserving of this award in excellence in teaching."

In response to his honor, Dr. Domina commented: