Assistant Professor Andres Bustamante is transforming everyday community spaces into fun learning environments that informally foster STEM skills.
“Fractions are a notoriously difficult content area for young students, and they represent a barrier to engage in more complex math like algebra,” Bustamante said. “Many students begin to disengage with math when they struggle with fractions and develop insecure math identities. Fraction Ball is a more accessible way for students to learn fractions; it’s playful, hands-on, physically active, and based in the latest research in math learning.”

Bustamante designed the game after meeting with teachers and administrators at the El Sol Science and Arts Academy of Santa Ana. He was meeting with school staff to discuss the possibility of math  installations at the school, and the teachers asked what they might be able to install and begin “tomorrow.”

The school staff then mentioned they had just paved the basketball court and not drawn the lines yet.  Bustamante and his colleague, School of Education Research Scientist Kreshnik Begolli, drew up initial plans on a napkin over breakfast burritos that same day, then went to an on-campus park with Associate Professor Drew Bailey to sketch out lines on a court in chalk.

The game launched in 2019 at El Sol Academy, where it was “received with excitement and enthusiasm by students and teachers,” Bustamante said.

More importantly, it has since shown to improve math skills.

“Our work at El Sol Academy showed the students who were randomly assigned to play six 50-minute sessions of Fraction Ball during P.E. class made significantly greater gains on a fraction knowledge test than students assigned to remain in P.E., business as usual,” Bustamante said. 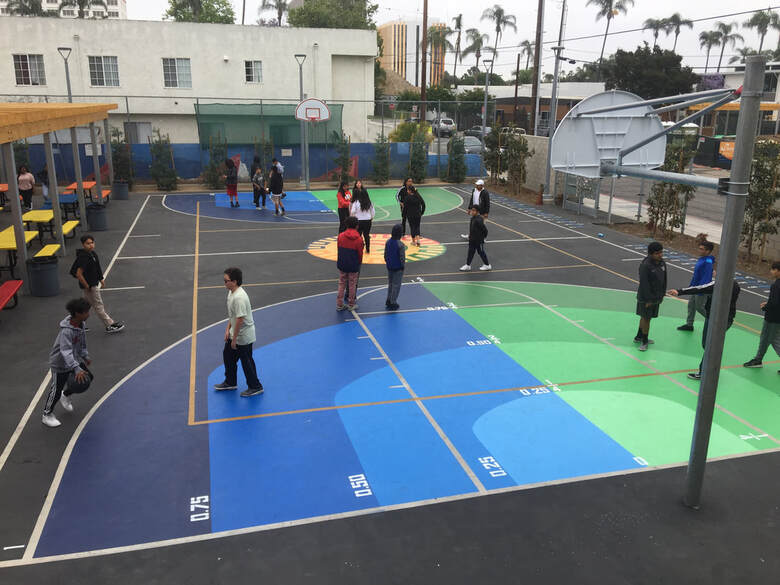 A game of Fraction Ball in action at El Sol Science and Arts Academy of Santa Ana.
Due to the pandemic, the painting and installation of the courts was delayed to the upcoming academic year. Instead, Bustamante and his team have led a series of design sessions with SAUSD educators in which they adapted the game for a virtual classroom, designed new activities to be used on the Fraction Ball court, designed new classroom lessons to coincide with Fraction Ball, and planned for implementation and sustainability in the district.

“We sent out Fraction Ball kits for teachers to emulate the game at their home and replicate the common  experience of playing the game together,” Bustamante said. “Teachers are so good at generating high-quality ideas for how to make valuable classroom learning opportunities.”

By the end of the five-year project, Bustamante said there will be Fraction Ball courts at all 36 SAUSD elementary schools, and they will study the impacts on 10,000 students across the district.
During the first year of the project, the team held seven two-hour design sessions with roughly 40 SAELI parents. Sessions were held in Spanish and parents told stories about their experiences in the spaces of their community and engaged in design activities to brainstorm and build design prototypes. The UCI team is now drawing out themes around culture, values and strengths from the stories families told and using their design ideas as inspiration for a series of installations that will be fabricated and implemented in the coming year. Examples include a giant version of the game “Loteria” at the bus stop, and an interactive mural that displays local heroes and demonstrates the step-by-step process for drawing a proportional face.

Following the installations, Bustamante sees data  collection and research taking place on several levels. At the most proximal level, he and his team will observe families interacting with the installations and take note of conversations – is there an increase in discussion about math and science, or an increase in familial engagement and interaction? Bustamante and Ahn also received an $800,000 grant from the Heising Simons Foundation to implement technology enhancements to these installations to make them more flexible, dynamic and accessible.

“We want to see if these installations are promoting caregiver-child interactions and dialogue,” Bustamante said. “There’s a lot of previous research to suggest such interactions predict positive development and later school success.”
Lastly, Bustamante plans to track progress using a county-wide dataset collected by First 5 Orange County, which assesses school readiness for every child in the county when they enter kindergarten. He will examine readiness levels in neighborhoods that have project installations and compare to similar neighborhoods without the installation to explore community level impacts on child development.

Moving forward, Bustamante will work alongside the city of Santa Ana to include playful installations in future revitalizations or redesign efforts by the city.

“One really exciting aspect of this project is how much enthusiasm there is from the city to adopt this initiative,” Bustamante said. “City leadership is already reaching out to our team because they want to integrate these ideas into their other ongoing construction projects.”

Bustamante played basketball as an undergraduate  at Emmanuel College in Boston before obtaining his Ph.D. in Developmental Psychology from the University of Miami, where he studied early childhood science education with Professor Daryl Greenfield. As a postdoc at Temple University, he was mentored by Dr. Annemarie Hindman and Dr. Kathy Hirsh-Pasek, who is also a co-PI on Bustamante’s NSF grant. While at Temple, Bustamante designed, implemented, and evaluated a life-size board game, “Parkopolis,” which combined evidence-based math and science content with play, physical activity, and gross motor development.

In March, the Association for Psychological Science awarded Bustamante a Rising Star designation, given to psychological scientists in the earliest stages of their post-Ph.D. research careers whose innovative work has already advanced the psychological  science field.

At the UCI School of Education, Bustamante feels supported by his colleagues, whom he calls a  “super team.”

“No matter what research challenges arise, we have an expert at the top of the field on our faculty that I can turn to for support and collaboration,” Bustamante said. “There’s such a diverse set of skills here, and  my development as a scholar has been transformed by being a part of this community.”