Drew Bailey received his Ph.D. in Developmental Psychology, with a minor in Psychological Statistics and Methods, in 2012 from the University of Missouri. Prior to joining the faculty at UC Irvine, he was an IES postdoctoral research fellow at Carnegie Mellon University.

Dr. Bailey’s research focuses on questions pertaining to individual differences in children’s mathematical development, such as:
* Why do some children find math so difficult?
* Why do children who struggle with math early in school often continue to struggle with math throughout their lives?
* What kinds of practices can be used to enhance math learning for all children?

Dr. Rosales-Rueda is interested in understanding the formation of human capital across the life cycle with a special focus on the importance of early childhood. Key to her research is the notion that human capital encompasses skills that are multiple in nature and related to cognition, personality, and health. Her research agenda explores questions such as: ​
Hallmarks of her research include the combination of large, nationally representative longitudinal, and experimental data with strong quantitative methods designed to approximate causal analyses.
Fifteen New Ph.D. in Education Students Admitted for Fall 2014

The 15 students were admitted from a highly competitive pool of 153 national and international applicants.

Over the five year study, researchers collected data on ~500,000 second through fifth grade students in a randomized control trial conducted in 52 schools. Six professors and 13 students worked on the project during its duration. 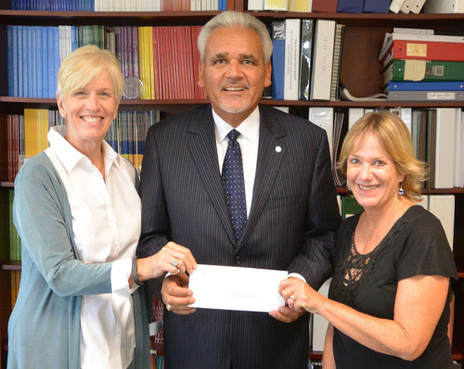 The School of Education received a $300,000 gift from AT&T to support its recent $11 million dollar grant from the U.S. Department of Education Office of Innovation and Improvement for The Pathway Intervention Project. This is the school’s first corporate gift.

​The project is led by Carol Booth Olson, director of the UC Irvine Writing Project and associate professor of education, with support from UCI Ph.D. students. The project will involve 240 Grades 7-12 teachers and their students in four school districts across the Southern California region. The project aims to close the achievement gap for EL students by providing high-quality professional development to teachers in the Pathway intervention, thereby improving teaching quality to help secondary ELs successfully complete courses in core academic subjects and become college-bound. Student outcomes will include improvements in writing as measured by an on-demand pre/post assessment of analytical essay writing and State and district assessments, ELA standardized test scores, and high school graduation rates. The project will serve 105,000 students in the districts throughout southern California.
Mentor Teachers Prepare for Co-Teaching with UCI Teacher Candidates

The School of Education teacher education programs partner with teachers in area schools to provide mentorship from experienced professionals for teacher candidates during their student teaching experience.

Each year over 200 Orange County teachers open their classrooms and share their expertise with candidates placed in their schools.

On September 15, the School of Education hosted an orientation for mentor teachers: "Preparing New Teachers: The Co-Teaching Model."

Encouraging discussion and providing examples that could be employed during the fall co-teaching experience, UCI School of Education faculty reviewed the key components of high-quality co-teaching models: (a) conferring, purposeful observing, debriefing; and (b) conferring, observed practicing, reflecting.

Serving over 2,000 young people, credentialed teachers engaged participants in creative writing activities in the morning, and math challenges and science experiments in the afternoon at five different locations throughout Orange County.

Dr. Gail Spivack (M.A.T./2010) is committed to promoting bilingual education. She calls herself a "professional volunteer," and is in her sixth year as a volunteer English Language Arts and reading teacher at El Sol Academy in Santa Ana, which she describes as "my best job ever!”

Dr. Spivack's experience as an educator has spanned several states and included a variety of vocations. She started her post-secondary education at a Florida community college where she earned a license as a medical technologist. After seven years of working as a med tech running labs in primary care physician practices, she earned a B.S. in Textile Science from Florida State University, an M.S. in Textile Materials and Management from North Carolina State, and a Ph.D. in Textiles from Virginia Tech. Throughout her education, Gail worked in university health center labs as a med tech in the evenings and on weekends.

After earning her Ph.D, Gail was hired as an assistant professor at Cornell University in the Department of Textiles. Subsequently, Gail was employed as a research scientist at Procter & Gamble (P&G) in Cincinnati, Ohio. After retirement from P&G and a move to California, Gail began volunteering in the THINK Togetherafter-school program at Sepulveda Elementary in Santa Ana, and her belief in importance of bilingual education grew with her experience in Southern California classrooms. Accordingly, during her time at Sepulveda Gail decided to earn a certificate in Teaching English as a Second Language (TESL) from UC Irvine Extension.
After completing the TESL program, Gail realized that she wanted more; she wanted to be able to input into the curriculum and methods of instruction in the classroom, not just deliver someone else’s program.
Gail considers herself very lucky to have found her niche, and the opportunity to teach at El Sol.  ​
Dr. Spivack's scholarship will be awarded fall quarter to select students pursuing their bilingual certification.

Brenda is committed to teaching science to high school students in the United States. Reared in Santa Ana, California, by Albis and Oscar Minjares, Brenda graduated from Middle College High School in 2008. She holds a Master of Arts in Teaching (MAT) from UC Irvine. Additionally, she holds a
Bachelor of Science in physics education from the University of California, Santa Cruz (KSTF Press Release).

Awarded $50,000 Grant from U.S. Department of Health and Human Services

The grant will support Ms. Miller's dissertation research: "Use of Spanish in Head Start and Dual Language Learners’ Academic Achievement: A Mixed-Methods Study."

Ph.D. student Jennifer Long has been named a Newkirk Graduate Student Fellow for 2014-2015 and will receive an $8,000 fellowship in support of her doctoral research being conducted at Crystal Cove State Park in Laguna Beach. Ms. Long is investigating ecohydrology citizen science, posing the question: Can youth develop an understanding of systems by engaging in authentic research?

Ms. Long's project engages fourth and fifth grade students from El Morro Elementary School in an afterschool club that includes trips to Crystal Cove's Environmental Study Look to conduct on-site science research in echydrology. As she explains, "I am interested in helping children complete the scientific process from hypothesis to presentation, and I am studying whether this process helps them grasp difficult system concepts such as the water cycles."

The Newkirk Center for Science and Society, established at UC Irvine in 2001, is dedicated to improving science's response to community needs and to increasing the effective uses of scientific results for the benefit of society. The Center supports conferences, workshops, colloquia, lectures, and funding of research.

Project Overview
This research is designed to study the influence of engaging in authentic research on youths’ science knowledge and skills. It involves students from a local elementary school, research scientists from UCI’s School of Biological Sciences, and Crystal Cove State Park staff in a Citizen Scientists’ After-school Club. During the intervention, youth participants engage in authentic, community-relevant research focusing on the study of ecohydrology. Changes in the water cycle represent both causes and consequences of contemporary climate change; no other large-scale Earth process is so critical to the human endeavor than the hydrologic cycle, which defines the availability of fresh water to support society. For the last decade, science has been attempting to understand how changes in ecosystem structure (i.e., plant transpiration) affects the partitioning of rainfall into the hydrologic components (Huxman et al., 2005)—how will a change in plant structure influence the loss of water back to the atmosphere and change patterns of river flow or aquifer recharge? Building on this research, the Citizen Scientists’ After-school Club will add to a large-scale database of where water goes as it cycles through the system, will provide data to park managers that can be used to inform management decisions, and will provide information to the general public about their State Park resources.

Project Goals
One goal of science education is to educate future citizens so that they are capable of navigating complex scientific concerns, understanding complex environmental issues, and acting in ways that maintain and protect Earth’s life-supporting ecological systems. Science knowledge, an understanding of science practice, and the ability to think in terms of systems can serve as important tools for making informed decisions about the natural world. As tomorrow’s decision-makers, today’s youth must build the integrated science knowledge and systems thinking capabilities that allow them to understand the complexity of natural systems and the role of science research in managing those systems. However, the complex nature of ecological systems and processes makes it challenging to teach ecology at all education levels, but it is particularly challenging elementary students to learn (Jacobson & Wilensky, 2006).
​
Research on citizen science projects may provide interesting and important insight into effective ways for youth to build science knowledge and skills by participating in authentic research. Citizen science refers to the engagement of non-scientists in scientific investigations, during which they generate useful and usable data for researchers. Citizen science offers powerful ways for learners to engage in community-based experiences, generate specific ecological knowledge, and develop science inquiry capabilities (Dickinson et al., 2012). Indeed, current research suggests that involvement in citizen science may lead to learner gains in content knowledge, more positive attitudes toward science, and deeper understandings of the scientific processes (Bonney et al., 2009).

Ph.D. Student Sarah Gilliland has been awarded a $15,000 Promotion of Doctoral Studies II scholarship from the Foundation for Physical Therapy to support her dissertation research.

Her dissertation, titled "Physical Therapist Students' Clinical Reasoning and Characterizations of Practice," focuses on how PT students learn to think critically and apply knowledge learned in the classroom to clinical practice.

Ms. Gilliand’s goal is to develop a line of research that will contribute to the development of guidelines for course and curricular development to promote effective teaching of basic science and clinical information.
​
She is advised by Professor Judith Haymore Sandholtz.
The Academy Charter High School Science Students Showcase Fall Science Research

Tenth grade students in Mr. Vincent Perez's science class at The Academy Charter High School in Santa Ana showcased their fall research during a poster session for the public on September 19th.

Mr. Perez had selected the top infectious diseases from the U.S. Center for Disease Control in Atlanta and asked students to select their top three choices. Based upon their selections, students were organized in teams of four to research the history, range, symptoms, and treatment of the disease and propose a new treatment, including unit cost and a dissemination plan.

Reviewers from UC Irvine and from the community listened to the student presentations, which included a public service announcement, either print or video, promoting their proposed treatment, and then offered praise and suggestions for improvement.

The Academy Charter High School is a partnership among the Orangewood Children's Foundation, Orange County Department of Education, and the UC Irvine School of Education.