Professor and Dean Deborah Lowe Vandell has been named to the 2014 list of the Top 25 Most Influential People in AfterSchool by the National AfterSchool Association (NAA).

In explaining the criteria for the honor, NAA Executive Director Gina Warner comments,
Professor Vandell started her career as an elementary school teacher and later received a Ph.D. in Psychology from Boston University. The author of more than 150 articles, her research focuses on the effects of developmental contexts (early child care, schools, after-school programs, families, neighborhoods) on children’s social, behavioral, and academic functioning. As one of the principal investigators with the NICHD Study of Early Child Care & Youth Development, she has conducted an intensive study of the development of 1,300 children from birth through the end of high school. This work is viewed by many social scientists as one of the most comprehensive studies of the short-term and long-term effects of early child care and the family to date.

Distinguished Professor of Education Jacquelynne Eccles has traveled to Europe and Russia this summer to meet with educational leaders and deliver a series of lectures and keynote addresses.

Professor Eccles lectured at the Eberhard Karls University of Tübingen and the Deutsches Institut Fur Wirtschaftsforschung in Germany. She delivered keynote addresses at the PhD IPF Graduate Student Academy in Bad Salzschlirf and at the Gender and Stem 2014 Conference in Berlin ("Gendered Socialization of STEM Interests in the Family"). At the Finnish Education Summit she delivered the keynote address to national school policy leaders from northern Europe.

After meeting with the Ministers of Education from Finland, Estonia, and Poland, Professor Eccles will conclude her European tour at the University of St. Petersburg, Russia, with professors from the Psychology Department.
2014 NCTQ Assessment of Teacher Education Program Quality Ranks Cal Teach Science & Math Program #1 in California, # 1 in Western Region, and # 8 in U.S. out of 890 Teacher Preparation Programs Evaluated Across the United States

NCTQ evaluated 890 teacher prepration programs across the United States. The final rankings were tabulated from scoring on key standards, booster standards, and assessment and data: 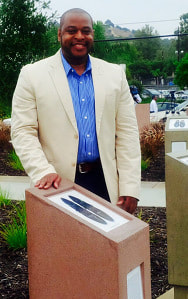 Reginald Sample, Ed.D. Honored with "Walk a Mile in My Shoes" Display

Walk a Mile in My Shoes, a public artwork started in 2011 by Kim Abeles (MFA from UCI in 1980), was commissioned by the Los Angeles Department of Cultural Affairs and the Bureau of Engineering.

The initial display, a redesign of two traffic medians, opened to the public at Martin Luther King, Jr. Boulevard and Rodeo Road in Los Angeles. The display features photographs of the shoes of participants of the peace marches and colleagues of Dr. King. Artist Abeles (recipient of the 2013 Fellowship from the John Simon Guggenheim Memorial Foundation) and professional photographer Ken Marchionno photographed the shoes in Atlanta, Georgia, from the collection of Xernona Clayton's Civil Rights Walk of Fame.

A second site has been introduced at Jefferson Boulevard and Rodeo Road. The site occupies 20,000 square feet that has been transformed from a traffic median into a mini-park for visitors. The photographic tiles at this second site feature shoes of local, community-based activists.

As explained by Artist Abeles:
Dr. Reginald Sample, Principal of Susan Miller Dorsey High School, and his shoes were selected for commemoration at the Jefferson/Rodeo site. During the June 26th unveiling ceremony, Dr. Sample, alumnus of the CSU/UCI Joint Ed.D. in Educational Administration and Leadership, was acknowledged as a “community member who goes that extra mile to help others.” His monumentation includes the following text:
More information about Dr. Reginald Sample: Dr. Reginald Sample 2010 Spotlight

Five graduate Student Researchers from the Working Memory and Plasticity Lab presented their research findings during a poster session on June 5, 2014 - Jacky Au, Grace Lin, Youngmin Park, Nancy Tsai, and Tyler Watts. The theme for the session was “Experimental Research Methods.”
​
"The Cognitive Mechanisms of Delaying Gratification"
Jacky Au, First Year Doctoral Student: Learning Cognition, and Development (LCD) Specialization
Abstract: Delay Discounting (DD) is the tendency to ascribe correspondingly lower value to a reward the further into the future it is to be received. Higher DD rates are associated with more impulsive decision making that manifests over the lifespan in poorer outcomes on measures of intelligence and working memory (Shamosh & Gray, 2008), addiction (Koffarnus et al. 2013), and cognitive control (Casey et al. 2011). The purpose of this pilot study was to tease apart the cognitive mechanisms that might underlie DD by examining working memory load and proactive interference. Twelve students from UC Irvine were recruited and assessed using a modified version of the Monetary Choice Questionnaire with and without a cognitive manipulation in a within-subjects design. The cognitive manipulation consisted of math problems that introduced both a working memory and interference load. Data analysis revealed that there was no difference in DD rates between conditions with and without the cognitive manipulation. Patterns of results in the cognitive manipulation suggest random responding, and no systematic bias in DD choices. Future research that incorporates a less taxing manipulation may be more successful in producing these systematic biases.

"Vocabulary Acquisition in Spanish-Speaking ELLs: Cognates vs. Non Cognates"
Grace Lin, Second Year Doctoral Student: Learning Cognition, and Development (LCD) Specialization
Abstract: Previous studies have shown cognate awareness and strategy to be particularly useful in helping English-Spanish bilingual students understand and interpret Spanish-English cognate words (i.e., words that share similar orthography and sometimes phonology). However, most of these studies focused on older (fourth grade and above) children. The aim of the present study is to see whether young English-Spanish bilingual students are better able to recognize and define Spanish-English cognates as opposed to non-cognates without the explicit cognate strategy instruction. We modified the Root Word Inventory to include 50% cognates and 50% non cognates, and we tested a total of 70 first, second, and third graders. A 3 (grade level: 1st, 2nd, 3rd grade) by 2 (cognate vs. non cognate) repeated measures within-between ANOVA revealed a significant main effect for grade level. Particularly, third grade students performed much better than first and second graders. There was, however, no cognate effect, suggesting that younger children might not be aware of the metalinguistic strategy, that the strategy must be explicitly taught, or that these children might not have a strong enough vocabulary knowledge in Spanish for the cognate strategy to work.

"Feedback Effects of Working Memory"
Nancy Tsai, First Year Doctoral Student: Learning Cognition, and Development (LCD) Specialization
Abstract: Working memory, a critical cognitive function, is limited in capacity and requires control to actively maintain information in the face of distraction. Individual differences in working memory performance vary due to conditions that tax the system which include anxiety, pressure, stress, and intrusive thoughts (Beilock & Carr, 2001; Eysenck & Calvo, 1994; Schmader & Johns, 2003). Findings on the effects of feedback on performance are inconclusive. Studies have yet to examine the effects of feedback on working memory. The present study seeks to examine the effects of such conditions by providing fictitious feedback-positive or negative- during a working memory task.

​"Do Changes to Standards Documents Affect Teachers' Curricular Choices in Mathematics?"
Tyler Watts, Second Year Doctoral Student: Educational Policy and Social Context (EPSC) Specialization
Abstract: This pilot study aimed to compare the mathematical content choices of teachers who were provided with the new Common Core Standards (CCSSM) versus teachers working with previous state standards. In order to investigate this, I provided UCI undergraduates with one of two randomly assigned standards documents, then asked them to indicate how often they would teach various competencies. Analysis indicated no statistically significant differences. There is some indication that students in the CCSSM condition put less emphasis on non-CCSSM topics and procedural instruction. A power analysis suggests that a larger sample size is needed to detect whether differences truly exist.
Certificate in Afterschool Education Awarded to 42 Undergraduates

The School of Education hosted an awards ceremony for the 42 undergraduates who earned their Certificate in After-School Education (CASE) during the 2013-2014 academic year.

The awards, which were held at the end of the undergraduates' final class of 2014, were attended by Dean Deborah Lowe Vandell, Director of Undergraduate Education Sue Marshall, Instructor Jenel Prenovost (Executive Director of Research & Evaluation at THINK Together), Cal Teach Program Counselor Whitney Young, and Undergraduate Counselor Denise Earley.

CASE, the first program of its kind when it was introduced in 2008, provides a combination of classroom instruction and supervised fieldwork to help participants gain:
Program goals include:
To earn a certificate, an undergraduate must complete a minimum of six courses totaling 24 quarter units and a minimum of 70 hours of field experience. Students select courses from the categories below, choose an elective course, and complete the CASE Capstrone course: "Advanced Fieldwork in After-School Education."
Additional information about CASE​​